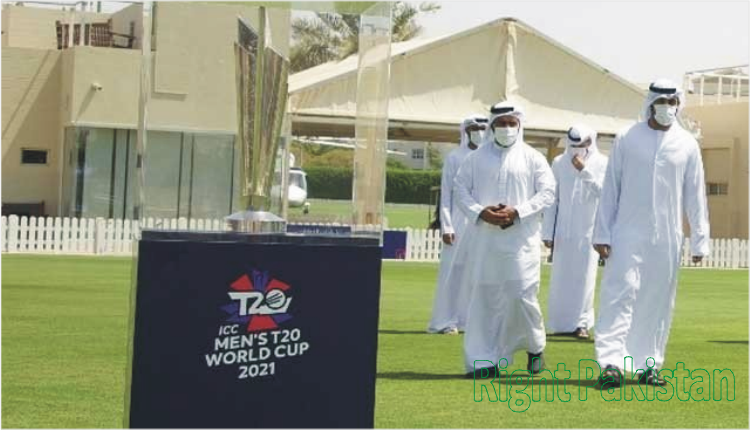 The ICC T20 World Cup 2021 trophy has been unveiled in Dubai.

Sheikh Nihan Mubarak Al Nihan of UAE was the chief guest at the unveiling ceremony held in Dubai.

The Emirates Cricket Board is making all the arrangements for the World Cricket Festival to be hosted by India starting October 17.

Earlier, the T20 Cricket World Cup was to be held in India. India was to host the tournament in its home country.

But due to Corona’s situation in India, the tournament was shifted to the UAE.

India is still the host of this tournament.

However, the tournament is now scheduled to be played in various cities in the UAE.

The tournament will also be played in the UAE according to Corona SOPs.

Matches are scheduled in Dubai, Abu Dhabi, and Oman.

The event’s super qualifier round will begin on October 17.

Pakistan India cricket match, in the T20 World Men’s World Cup, will be held on October 24.

It is also expected that the Pak-India Cricket match will be of great interest to the people on both sides of the border.

Who is Favourite to Win the Trophy?

Even after the change of chairman of the Pakistan Cricket Board, it is expected that the Pakistan national team will perform well in this tournament.

The new chairman of the PCB, Rameez Raja, has directed the captain of the national squad, Babar Azam, to give the best results.

Samsung Galaxy A30 Price in Pakistan