Two policemen killed in a clash with TLP workers in Lahore

Lahore: Two policemen were killed in a clash with TLP workers in the provincial capital Punjab.

Workers of the banned Tehreek-e-Lubbaik Pakistan (TLP) have staged a sit-in in Lahore.

The banned Tehreek-e-Lubbaik Pakistan (TLP) is protesting in Lahore and the situation became tense when a clash broke out between police and protesters at MA College.

On MA College Square, two policemen were killed due to the clash between TLP workers.

A stampede broke out due to the clash during which two policemen came under the vehicle of the protesters and died. 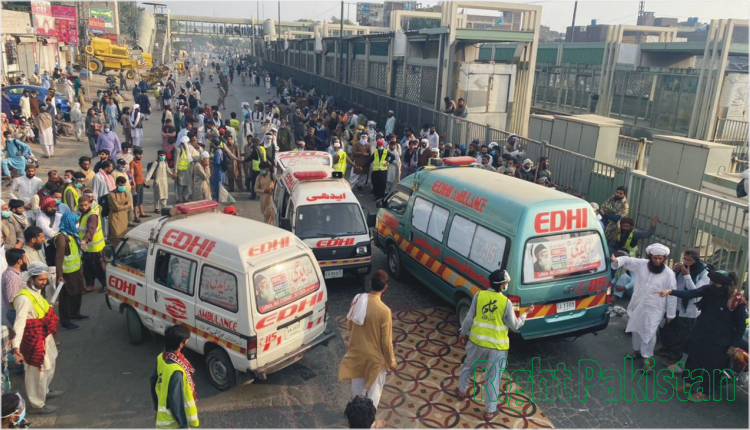 Police sources said that both the officers sacrificed their lives while performing their duties.

Meanwhile, the participants of the sit-in in Lahore for the release of its leader Saad Rizvi have now left Lahore for Islamabad.

Clashes between protesters and law enforcement have been reported in several places.

The police shelling tears gas to disperse protesters. Several members of the banned outfit were also injured in clashes with police.

On the other hand, the Punjab government has formed a two-member committee comprising provincial law minister Raja Basharat and prosecution minister Chaudhry Zaheeruddin to hold talks with the banned TLP.

It should be noted that the banned party had turned the Eid Milad-un-Nabi procession on Tuesday into a sit-in protest for the release of its leader Hafiz Saad Rizvi.

The TLP chief Saad Rizvi was arrested on April 12.

Federal Minister Sheikh Rasheed has already said that the demands of TLP cannot be fulfilled.

The TLP has demanded the expulsion of the French ambassador and the release of Saad Rizvi.

On the other hand, in view of the fear of protests and sit-ins in Rawalpindi, Islamabad, strict security arrangements have been made.

Some important information about face masks