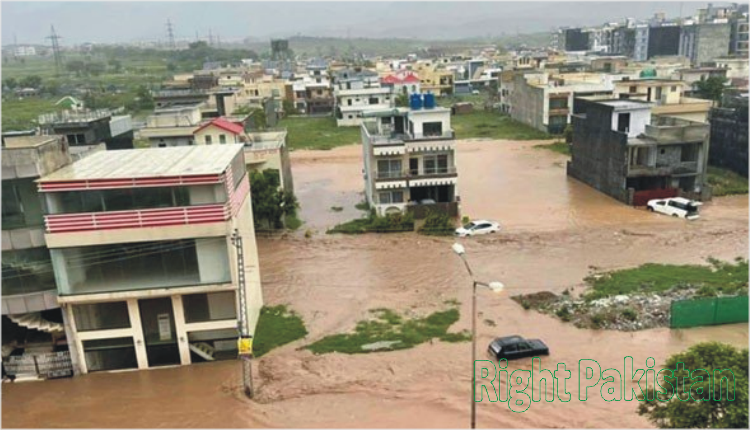 ISLAMABAD: Torrential rains in Islamabad killed 2 people in a flood situation in the federal capital.

The flood situation affected the flow of traffic while water accumulated in low-lying areas including roads and streets.

A CDA spokesman said that an operation was underway in Islamabad to resolve the flash flood-like situation.

Casualties due to Torrential rains in Islamabad:

A mother and son were killed when a basement on E-11 Street flooded.

Kashif Yasin lived in the basement with his family.

Kashif’s wife and 7-year-old son Mustafa died after being flooded by rainwater.

Cloud Burst or Something Else?

According to the Islamabad administration, a cloud burst caused a flood situation in different areas of Islamabad.

However, the Meteorological Department denied reports of cloudbursts in Islamabad, saying recent rains had already been predicted.

The rains have been forecast by the Meteorological Department.

On the other hand, heavy rains inundated Nala Lei in Rawalpindi.

The water level at Kataria exceeded 21 feet due to which water entered Javed Colony and Arya Mohalla.

Danger sirens were sounded while Bridges at New Kataria and Dhok Rata are also closed.

Pakistan Army and other agencies have been called in to deal with the situation.

MD Wasa Raja Shaukat said that the risk of floods has been averted in Rawalpindi due to less rainfall than in Islamabad.

Heavy rains had raised the water level in Nalla Lei, but due to timely cleaning, a 40,000 cusec ripple passed through Nalla Lei and flowed into the Sawan River.

In this regard, the ISPR said that due to heavy rains, the canal has gone up and water has also accumulated in E-11.

Troops are assisting the civilian administration in rehabilitation and relief operations, while an emergency plan has been drawn up to deal with the flood situation.

How to make charcoal mask for glowing skin at home?