The Taliban reached 50 kilometers near Kabul

President Ashraf Ghani is preparing to resign and move abroad with his family: Indian media 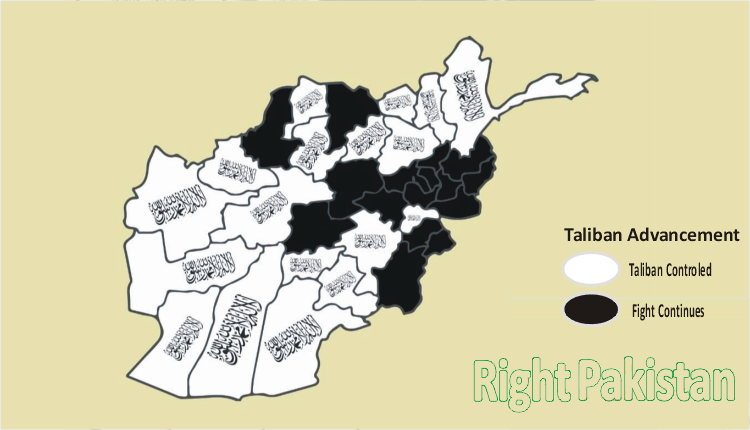 Kabul: The Taliban reached 50 kilometers near Kabul. The Afghan government was limited to a few areas.

The Taliban have made rapid advancements since the US withdrew from Afghanistan.

After the Taliban took over most of Afghanistan, President Ashraf Ghani is preparing to resign and move abroad with his family.

After capturing several provincial capitals, the Taliban are now rapidly advancing on Kabul.

The Taliban are only 50km from the Afghan capital, Kabul.

Foreign media has claimed that the Afghan Taliban had tightened their territorial stranglehold around Kabul.

On the other hand, the refugees from the insurgents’ relentless offensive areas flooded the capital while the US Marines returned to oversee emergency evacuations.

The Afghan Taliban tighten their territorial stranglehold around Kabul, as refugees from the insurgents' relentless offensive flood the capital and US Marines return to oversee emergency evacuations https://t.co/mXdrJ2Ieao pic.twitter.com/QqnNZgdvuv

On the other hand, the Afghan government is limited to a few areas.

According to the Russian news agency, the Taliban’s advance towards the Afghan capital Kabul is in full swing.

The Taliban are now only 50km from the only province left under Afghan government control.

Yesterday, the Taliban took control of another Afghan province, Logar.

The province is known as the hometown of Afghan President Ashraf Ghani.

According to Afghan media, Logar Governor Qayyum Abdul Qayyum and about 40 security personnel with him fought the Taliban for about six hours.

However, other officials, including the provincial police chief and the NDS officer, surrendered to the Taliban.

On the other hand, preparations are underway for the evacuation of US diplomatic staff in Kabul.

U.S. officials have instructed officials to dispose of sensitive items.

According to the Pentagon, 3,000 US troops will arrive in Kabul by tomorrow.

US State Department spokesman Ned Price said the Taliban had vowed not to target diplomatic buildings.

In addition, Norway and Denmark have announced the closure of their embassies in Kabul.

The Netherlands has also begun considering closing its embassy in Kabul.

If the Taliban recapture Kabul, it will be their second era after two decades.

On the other hand, after the Taliban took over most of Afghanistan, President Ashraf Ghani is preparing to resign and move abroad with his family.

This claim has been made by the Indian broadcaster News 18.

The claim states that Afghan President Ashraf Ghani has decided to resign after consulting with his colleagues, after which he will move to a third country with his family.