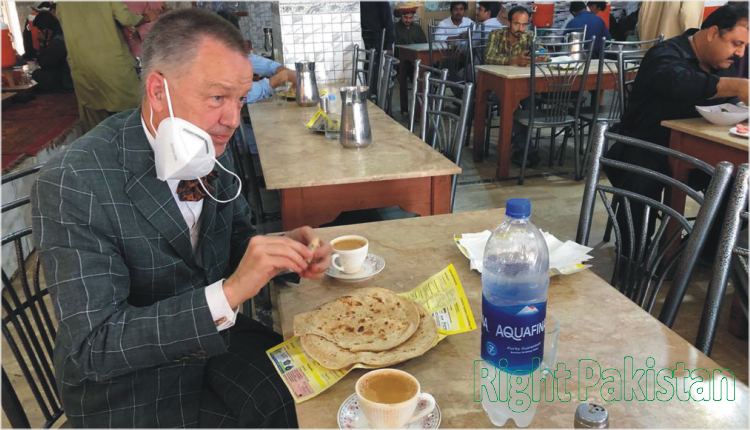 Like his predecessor, the current German Ambassador to Pakistan Mr. Bernard Schlagheck is quite popular in Pakistan.

Stopped at a roadside restaurant in #Karachi and enjoyed some chai & chapatis there. Was really surprised when I noticed that the chapatis were served on a page of a #German telephone book! Can anyone tell me why they use 🇩🇪 Yellow Pages to wrap it? 🤔 pic.twitter.com/kLRBBoU7Cp

The reason behind his popularity is that he likes to be in general public without protocols and even security.

German Ambassador to Pakistan in Karachi

But this time, the German ambassador has been shocked by his habit of being in local general public.

The story is that the Mr. Bernhard Schlagheck, the German ambassador who is in Karachi these days. He stopped at a roadside hotel for tea and some Soleimani prathas.

Mr. Bernhard Schlagheck was astonished when the tea was served in traditional cups, but the parathas offered to him were kept in the German telephone directory.

Mr. Bernhard Schlagheck raised the question if anyone could explain why people use the pages of the German telephone book to wrap bread.

Mr. Bernhard Schlagheck raised this question on his official account on the social networking site.

Mr. Bernhard Schlagheck has also uploaded three photos with his post in which he can be seen eating in road side hotel sitting with general public.

Mr. Bernhard Schlagheck writes, “We need more female voices in cinema & to look at the world from their lens”.

Mr. Bernhard Schlagheck also had a trip though the city, arranged by his colleague & friend Holger at Germany Consul General.

Mr. Holger showed him around during his recent Karachi trip. He was particularly moved to stand in front of Mazar-e-Quaid.

“Father of the Pakistani nation was without any doubt an inspiring leader! Much to learn from him”, Mr. Bernhard Schlagheck offered tribute to Quad-e-Azam.

“I was impressed by the intensity of the different art works exhibited there. Great to see the dedicated work and creativity of future generations of Pakistan artists at Indus Valley School”, he added.

How to Find Your Ufone Number 2021