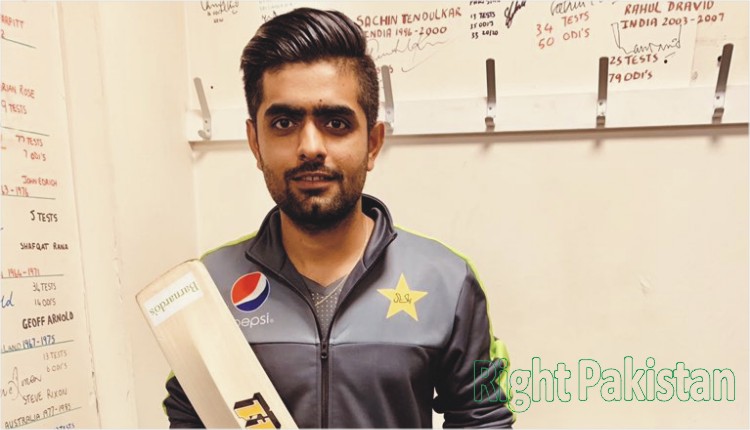 Cricketer Babar Azam is a stylish Pakistani cricketer who has a motivational success story starting from bowl picker to the skipper of the national team.

At this time, Babar Azam captains the Greet Shirts in all formats of men’s cricket from the Pakistan side.

Babar Azam is hailed as one of the best-opening talents in cricket Pakistan has ever seen. He is a stylish right-handed batsman and right-arm off-break bowler.

Date of Birth and Family

Babar Azam was born on 15th October 1994 in Lahore. Babar was inspired to become a cricketer by his cousins, the Akmals Brothers (Kamran, Umer, and Adnan).

Babar Azam started playing cricket in the streets of the walled city of Lahore.

Babar often recalls that his father (Papa Jani) took him to matches, stood there in scorching heat to observe & challenge him to push harder.

Babar is never shy to share his humble background. Muhammad Azam was a watch mechanic.

Babar often memorizes his father’s great struggle for the family, especially for his sons and daughters.

Babar paid tribute to his father, “From your small watch repair stall, you not only provided for the family but also transferred your values & dreams in us. I’m eternally grateful to you!”

Babar is the most loving kid of his mother, whom he respects, loves, and shares everything. She sacrificed a lot for her children.

Babar remembers those sacrifices, “The first bat I purchased was of 1500 PKR. This was your entire saving but you gave it to me.”

“You believed in me when others didn’t. Every inch of mine is indebted to you. I love you so much”, added Babar Azam

Prior to joining a cricket academy, Babar had been a ball picker boy at Gaddafi Stadium between 2006 and 2008.

Babar debuted in ODI format on May 31, 2015, against Zimbabwe at Gaddafi Stadium.

Babar debuted in T20 format on Sep 07, 2016, against England at Emirates Old Trafford.

Babar has been playing for Pakistan U19, Sylhet Royals, Pakistan, Pakistan A, Islamabad United, and Karachi Kings in PSL.

In September 2019, Babar was designated as vice-captain of green shirts. Next Friday was one of Babar’s biggest days when H took the field as Pakistan vice-captain.

He tweeted on social media, “I will want the entire country as well as the National Stadium crowd to make this a day to remember for me”. What a fortune that he succeeded in doing it.

On Friday, only two weeks before his birthday, Babar knocked his 11th ODI 100 playing against Sri Lanka at home grounds. National Stadium Karachi saw this 100 after a decade.

Babar couldn’t ask for a better place to complete his 11th ODI century and fastest 1000 runs in a calendar year than to do it in front of his people in Karachi, Pakistan. He remembers what a game it was.

It was a huge day for Babar Azam that ICC (International Council of Cricket) praised the stylish Batsman. ICC tweeted, “After Zaheer Abbas and Saeed Anwar, Babar became the 3rd Pakistan batsman to register a hat-trick of ODI 100s”.