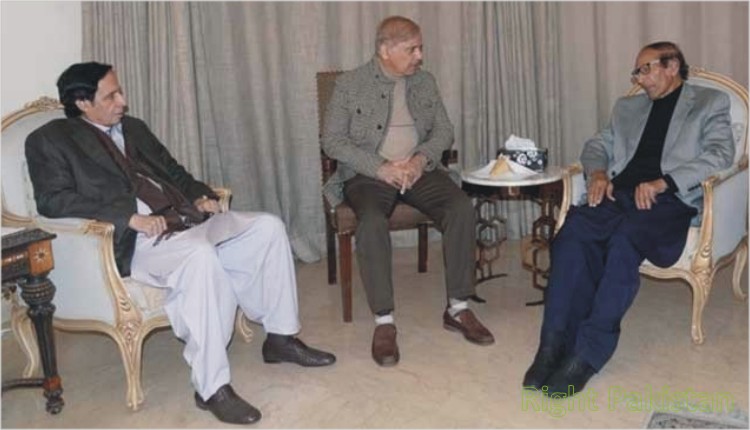 LAHORE: Shahbaz Sharif meets the Chaudhry brothers for a no-confidence motion against the PTI government.

PML-N President and Leader of the Opposition in the National Assembly Shahbaz Sharif met PML-Q chief Chaudhry Shujaat Hussain and Chaudhry Pervaiz Elahi at his residence after a long absence of 14 years.

The two leaders discussed in detail the current political situation in the country including other issues of mutual interest while Shahbaz Sharif sought the health of Chaudhry Shujaat Hussain on behalf of himself and Mian Nawaz Sharif and wished him a full recovery.

Here is the inner story of the meeting between Shahbaz Sharif and the Chaudhry brothers.

The meeting between Shahbaz Sharif and Chaudhry brothers lasted for one hour and twenty minutes, during which three rounds were held.

The other was attended by Shahbaz Sharif, Chaudhry Shujaat Hussain, and Pervez Elahi.

Shahbaz Sharif tried to take the Chaudhry brothers into confidence by informing them of the decisions of the opposition and asking them to join the no-confidence motion.

Shahbaz Sharif said that despite being an ally, your concern about the government is coming to light. He said that it is time to make a big decision.

He said that Asif Ali Zardari and Maulana Fazlur Rehman have also met him, the opposition is unanimous that the government should go home.

The Chaudhry brothers informed that after listening to all the words of Shahbaz Sharif, they would support the no-confidence motion and respond to the political situation after-party consultation.

The Chaudhry brothers said that the coming days are important and we will make decision after considering the situation.