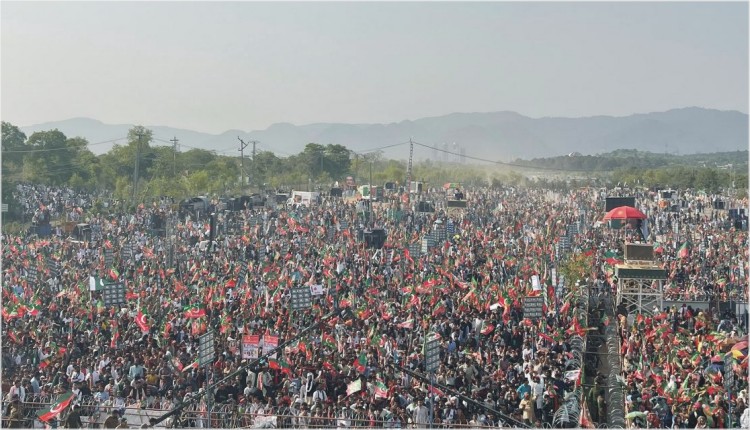 Addressing the federal ministers present on the stage, Prime Minister Imran Khan said that the United Opposition tried to break his ministers by giving them greed but they supported him for which he is grateful.

He thanked the participants of the meeting and said that I have to speak my heart out today.

Foreign Minister Shah Mehmood Qureshi in his address said that the united opposition says give NRO and we will withdraw the no-confidence motion.

He said that this nation has woken up and when nations woke up, history changed, when Army Public School was attacked in Peshawar and when the nation woke up, the terrorists were defeated.

He said that now that the nation is awake, tell me whether the looters will be defeated or not, bring as much wealth as Asif Ali Zardari has because one of the workers will not be ready to be sold.

Shah Mehmood Qureshi said that today the people of Pakistan have shown confidence in the captain, I and my son are members of the assembly we will not bargain, we will stand and will stand.

Addressing the nation, he said that you are seeing that Imran Khan is alone, the symbol of the united opposition, flag, and manifesto are not one.

At the beginning of the meeting, Federal Interior Minister Sheikh Rashid said that our nation has tolerated inflation and employment, electricity bills and this nation is now the PML-N leader Nawaz Sharif, PPP co-chairman Asif Ali Zardari dacoit.

Sheikh Rashid said that the three corrupt gang leaders are dacoits, they managed to reduce their platelets and went to London, conspired, and went to Saudi Arabia with King Abdullah.

PTI workers from Punjab, Khyber Pakhtunkhwa, and Hazara continued to arrive to attend the meeting.

“A country is ruined when 3 stooges who have big properties, offshore accounts wants to rule. I won’t give NRO!”- @ImranKhanPTI #IamImranKhan pic.twitter.com/2yCRr5WEyH

Regarding the Jalsa, the organizers claimed that there were more than 2 million participants in the venue.

The workers include women who reached Islamabad by buses, cars, and wagons.

Earlier, Prime Minister Imran Khan in his audio message last night appealed to the people to reach the venue as soon as possible and termed today’s meeting as a war for the future of Pakistan.

City Traffic Police Rawalpindi had completed traffic arrangements for the Jalsas of political parties in Islamabad.

According to Chief Traffic Officer Rawalpindi Naveed Irshad, more than 370 traffic police personnel have been deployed to maintain the flow of traffic.

Naveed Irshad said that traffic would be diverted to alternative routes during rallies on major highways.

A special traffic plan has been developed for ambulances and emergency vehicles in case of any emergency.

According to CTO Rawalpindi, the diversion was done for the convenience of citizens and to avoid rush hour.

Additional personnel was deployed at diversion points and alternative routes to facilitate the citizens.