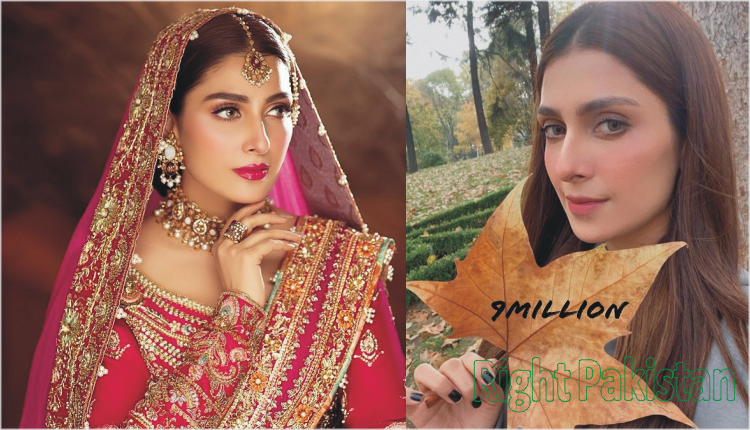 Ayeza Khan has recently crossed the milestone of 9 million followers on Instagram.

In the latest post shared by Ayeza Khan, she is holding a leaf in her hand, which reads “9 Million” in bold letters.

Nadia Hussain, Kinza Hashmi, Maria B, Fatima B, and others congratulated her on achieving this milestone.

Ayeza Khan looks very happy to have achieved this milestone.

Who is Pakistani actress Ayeza Khan?

Ayeza Khan is the top fashion model and a versatile actress in Pakistan, who is in great demand both inside and outside the country for her work.

The two beautiful actresses have worked together in a photoshoot of a Pakistani clothing brand last winter.

In addition, Ayeza Khan has worked on several modeling projects abroad also, about which she keeps sharing updates on her official Instagram account.

Unlike her contemporary actresses, Ayeza Khan is using social media in the true sense.

She regularly uses social media to share her photoshoots and roles in dramas.

In a new post, Ayeza has also used the hashtags “Celebrating” and “9 Million Followers”, which shows that she is not only happy with the milestone but also appreciates its importance.

This beautiful Pakistani actress has given much super-hit drama series to the Pakistani drama industry.

“Mere Pass Tum Ho” was one such drama, which set many records and trends in this tradition.

In this play, Ayeza Khan had played a leading role against the well-known actor Humayun Saeed.

Nowadays, Ayeza Khan is appearing in the lead role in a new drama series “Chupke Chupke”.
In this comedy-drama series, she is playing the role of a playful actress.

PTI Tareen group formally announces: Another blow for IK in the vows of “Ring Road Scandal”