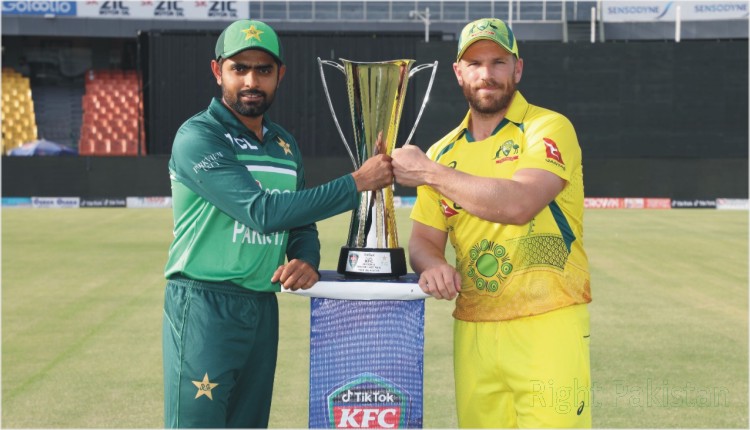 LAHORE: Pakistan won the PakAus ODI series 2022 against Australia at home after 20 years

Pakistan defeated Australia by 9 wickets in the third and decisive ODI match to win the series 1-2.

The national cricket team has beaten Australia in the ODI series at home after 20 years.

In the third ODI being played at Gaddafi Stadium Lahore, Pakistan captain Babar Azam won the toss and invited Australia to bat. However, the Australian team returned to the pavilion after scoring 210 runs in 41.5 overs.

In pursuit of the target, Pakistan had confidence at the start. After the early dismissal of opener Fakhr Zaman, Imam-ul-Haq, and captain Babar Azam played responsible innings.

A 190-run partnership was established between the two batsmen. Captain Babar Azam scored a century and scored 105 runs with the help of 12 fours while Imam-ul-Haq scored 85 runs.

It should be noted that Australia has won the three-Test series 1-0, the only T20 International match of the series will be played on Tuesday.

National cricket team captain Babar Azam set a new record by scoring 16 international centuries in the shortest innings after scoring a century in the decisive match of the three-match series against Australia.

It may be recalled that Babar Azam, who led the national team in all formats, led the team to victory by playing a winning inning of 105 runs in the third ODI against Australia. After 34 years, Pakistan has defeated the Kangaroos at home.

The President dissolved the National Assembly of Pakistan