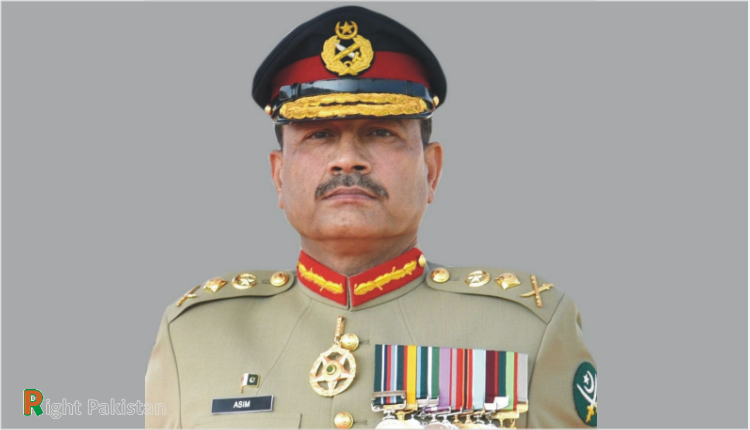 All possible efforts will be made for the safety and security of the people of Balochistan, Army Chief

According to the Department of Public Relations of the Pakistan Army (ISPR), the Army Chief visited the Corps Headquarters on the first day, where he laid wreaths on the martyrs’ memorial and offered Fatiha.

Later, the Chief of Army Staff was also given a detailed briefing on operational, training, and other matters of formation.

After that, the Army Chief also visited the Command and Staff College Quetta and the School of Infantry and Tactics and interacted with the young officers and instructors.

On the second day of the visit, the Army Chief visited Turbat where he was apprised of the current security situation in South Balochistan and the steps taken by IGFC Balochistan to ensure a safe environment.

The Army Chief said that every possible effort will be made for the security and safety of the people of Balochistan.

The war against terrorism will continue for lasting peace and stability, Army Chief

PESHAWAR: Chief of Army Staff General Syed Asim Munir has said that no one will be allowed to stop the hard-earned achievements in the war against terrorism.

According to a statement issued by the Public Relations Department of the Pakistan Army (ISPR), the Chief of Army Staff visited the Tirah Valley and Khyber District, where he spent the day with the soldiers deployed on the Pak-Afghan border.

He said that the writ of the state had been established by the numerous sacrifices of the tribal people and the security forces.

The Army Chief said that our war against terrorism will continue with the support of the nation till we achieve lasting peace and stability.

The Army Chief said that the defense of the motherland will be ensured at all costs and there will be no place for those who disturb the peace.

The COAS General Asim Munir said that no one will be allowed to stop the hard-earned achievements in the war against terrorism.

The Army Chief visited the Corps Headquarters Peshawar and laid wreaths to pay homage to the martyrs.

The Army Chief was also briefed on operational, training, and other matters of formation at the Corps Headquarters. These include efforts to create a safe environment for socio-economic development projects for the development of the newly merged districts.

If the enemy imposes war, a full response will be given, Army Chief

RAWALPINDI: Chief of Army Staff General Syed Asim Munir has said that any misunderstanding results in misadventure and if the enemy ever imposes war, a full reply will be given.

According to a statement issued by the Public Relations Department of the Pakistan Army (ISPR), the Army Chief visited the Rakh Chakri Center of the Line of Control and met the personnel posted on the front lines.

On this occasion, the Army Chief was briefed about the latest LoC situation and operational preparations of the formation.

Addressing the soldiers, the Army Chief said that the Indian leadership has recently made very irresponsible statements on Gilgit-Baltistan and Azad Kashmir but we are ready to defend our country.

“Let me make it categorically clear, Pakistan's armed forces are ever ready, not only to defend every inch of our motherland, but to take the fight back to the enemy, if ever, war is imposed on us,” army chief Gen Asim said commenting on statements from India during his LOC visit pic.twitter.com/IvNREn1sA6

The Army Chief said that the Indian state will never achieve its nefarious ambitions and the world has promised the Kashmiri people according to the UN resolutions.

On this occasion, the Army Chief interacted with the officers and soldiers and appreciated their high morale, professionalism, and combat readiness while performing their duties under difficult conditions. Earlier, Corps Commander Rawalpindi Lieutenant General Shahid Imtiaz welcomed the Army Chief.