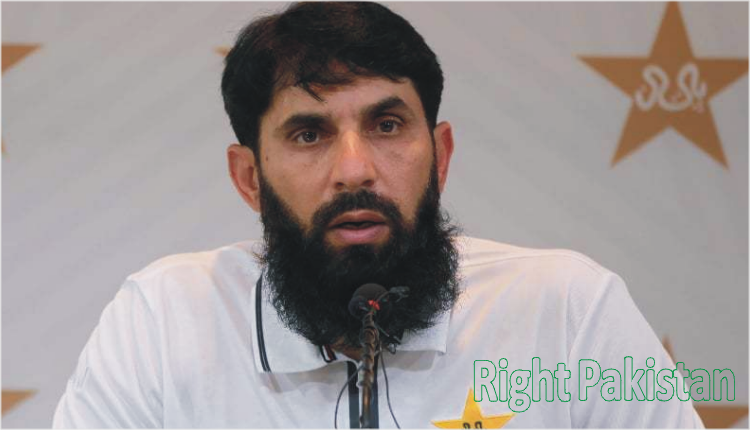 Karachi: Finally, Misbah broke his fast of silence; he opened up on the issue of his resignation from the responsibility of the head coach of PCB.

Misbah-ul-Haq and Waqar Younis had resigned from the posts of the head coach and bowling coach respectively after seeing the change in the Pakistan Cricket Board.

Misbah did not give a clear reason for his resignation from the posts of head coach but has now broken his silence.

Misbah Broke His Fast of Silence:

Speaking on a private TV channel, he said that in Pakistan, focusing only on results is a big problem, we do not go beyond that and we do not focus on improving players and skills.

Misbah-ul-Haq said that as soon as they lose a match or a series, they start looking for scapegoats to save themselves.

“If we continue with cosmetic surgery like this, nothing will change,” said Misbah-ul-Haq, the former captain of the Pakistan cricket team.

“You can change coaches and players, but the real problems will remain unchanged,” he said.

Misbah-ul-Haq also criticized the changes made by the PCB’s selection committee for the T20 World Cup.

It should be noted that under these changes, senior all-rounder Shoaib Malik and wicketkeeper-batsman Sarfraz Ahmed returned.

The first changes were made and the cricketers who were fired were brought back.

Misbah-ul-Haq said that first, they made changes for the team, and then a few days later they brought back the senior cricketers.

It may be recalled that Misbah-ul-Haq was first given the responsibility of both the chief selector and the head coach but later the power of team selection was taken away from him.

He broke his silence when the Pakistan cricket squad is there in Dubai to participate world T20 Cricket Trophy.

As expected, the Pak-India Cricket match will be of great interest to the people of Pakistan and India.