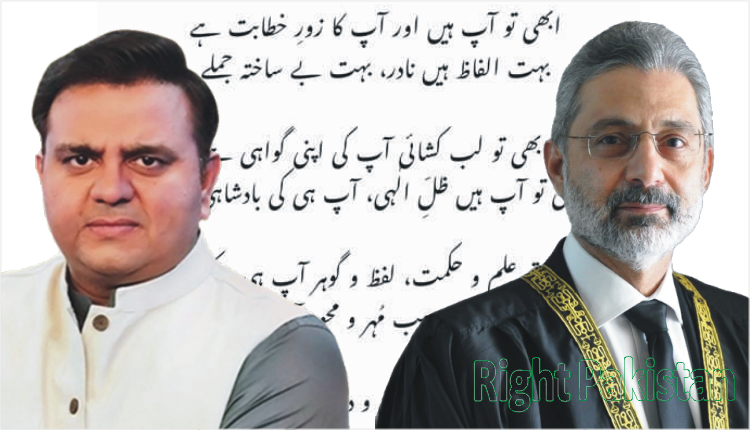 ISLAMABAD: Justice Qazi Faiz Issa is giving arguments in the Supreme Court for live coverage of the case against him.

In his arguments, he has repeatedly referred to the performance of the present government and especially Prime Minister Imran Khan.

Although there was no official response, it seems that the nerves of the government are responding now.

The poem “We haven’t spoken yet”

Dr. Pirzada Qasim Raza Siddiqui wrote this poem in Urdu with the title “Abhi Tak Hum Nahi Bolay”. Here is the translation of the poem.

“You are also and your emphasis is on rhetoric

Many words are rare, much unsolicited sentences

Right now, lip service is your own testimony

Right now you are the shadow of God, your kingdom

Right now, knowledge and wisdom, words and gems are yours

Right now all the decisions, all the seals and axes are yours

Right now all the money, gems, wealth are yours

Right now all the fame and means of fame are yours

What’s more, your compulsion will be evident in the tone right now

Right now, your own story will tell your story

Right now, just you, in your own eyes

Great, honorable titles are in their own eyes

Right now, you are the one singing your own song in the resounding high tones

All the pleasures of houses and homes

Right now you say how well you say

But when the whole conversation is about your biography

So remember this, we haven’t spoken yet”

Dr. Sahib’s boldness was evident in the fact that during Musharraf’s tenure, he recited this poem with great enthusiasm in Islamabad.

The gathering was also attended by a number of high-ranking government officials who were considered to be General Musharraf’s direct henchmen.

How to Check Your Jazz Number 2021

Online Business Ideas in 2021 – How to Start Online Food Business