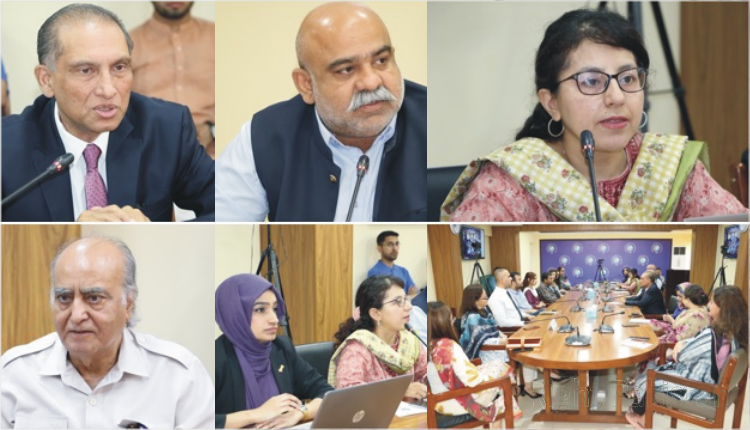 The Arms Control and Disarmament Center (ACDC) at the Institute of Strategic Studies, Islamabad (ISSI) organized an in-house meeting to mark the 24th anniversary of Youm-e-Takbeer on May 27, 2022, with a theme of achieving “Comprehensive National Security and the Role of Peaceful Nuclear Technology.”

In his opening remarks, Malik Qasim Mustafa, Director of ACDC, highlighted that nuclear technology has the potential to deal with traditional and non-traditional security challenges.

Pakistan is not only ensuring the security of its nation with utmost restraints and responsibility but it is also utilizing peaceful nuclear technology in almost every field.

He reiterates that peaceful nuclear technology has the potential to ensure comprehensive national security.

Pakistan must make use of peaceful nuclear technology in almost all sectors including energy, agriculture, industry, medical, environment, and other related areas to bring prosperity and growth.

In her briefing, Ms. Ghazala Yasmin Jalil, Research Fellow ACDC, said that Pakistan’s nuclear weapon capability is intended to primarily offset the conventional superiority of India. Pakistan’s basic guiding principle is Minimum Credible Deterrence, which has evolved into Full Spectrum Deterrence. It is working on a tirade of Land, Air, and Sea-based nuclear forces.

Ambassador Aizaz Ahmad Chaudhry, Director General ISSI, in his remarks said that Pakistan acquired the nuclear capability as a response to security threats from India.

Pakistan developed its nuclear program for defensive purposes only. This capability balanced Pakistan’s position vis-à-vis the conventional superiority of India.

Despite many lucrative financial offers and political pressures, the then government of Pakistan decided to conduct nuclear tests in 1998 as the only way to deter the security threats posed by India. He also emphasized utilizing nuclear technology for socio-economic security.

While recalling his memories from 1998, Ambassador Khalid Mahmood, Chairman BoG ISSI, said that Pakistan was a reluctant nuclear power. During the 1980 and 90s, Pakistan tabled various resolutions at the UN to declare South Asia as a Nuclear Weapon Free Zone (NWFZ).

However, India never accepted these proposals. After the Indian nuclear tests, Pakistan was forced to conduct the nuclear tests to ensure its national security. He also recalled and appreciated the unwavering support of the friendly states during those difficult times.

The Army Museum Lahore – A Must Visit Attraction in Lahore