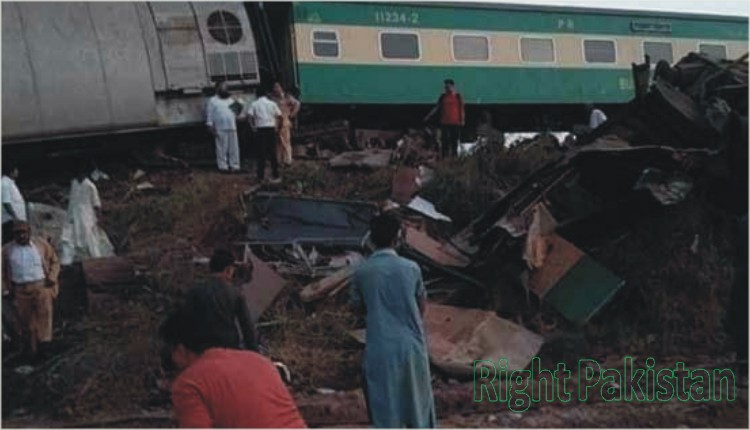 The tragic collision happened near Ghotki between Riti and Dharki railway stations.

So far, 62 people have been confirmed dead and dozens injured in the crash.

Most of the dead were aboard the Millat Express while most of the passengers on the Sir Syed Express were injured. 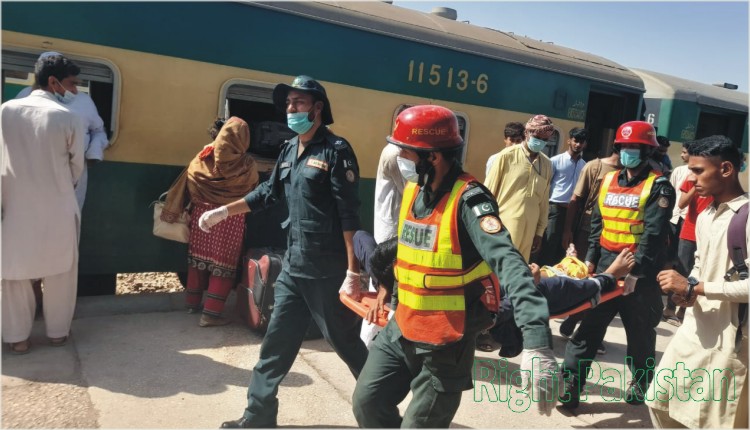 According to SSP Mirpur Mathelo Omar Tufail, 7 bogies were affected in the accident out of which 3 were completely destroyed.

The local administration says 6 to 8 bogies are stuck in each other.

The bogies were cut to get the bodies and injured passengers out.

Rescue operations had been slow and heavy machinery had not reached the crash site early.

Minor injuries were transported to nearby hospitals under self-help.

Preparations were underway to shift the critically injured to Sukkur and Rahim Yar Khan.

An NDMA spokesman said work was underway to remove debris from the track by relief trains and cranes.

In addition, two Pakistan Air Force aircraft are ready at Chaklala and PF Base Faisal Karachi.

How Did the Accident Happen? 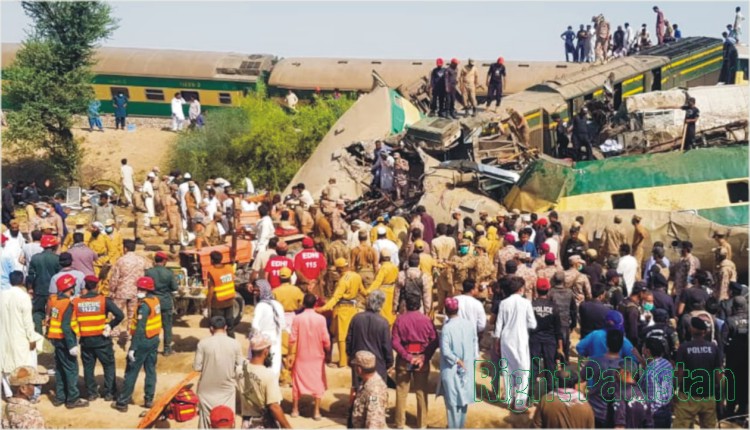 Local sources said that 6 bogies of Millat Express from Karachi to Sargodha derailed and went to another track.

Meanwhile, the Sir Syed Express coming from the opposite direction also reached and collided with the disembarked bogies of the Millat Express.

The accident happened due to bogie No. 10

According to an eyewitness, the hook of bogie number 10 installed in Millat Express was bad.

Boogie No. 10 derailed near Ronti station, causing an accident. Bogie No. 11 and 12 were also severely damaged.

As a result of the accident, the movement of trains between Sindh and Punjab has been suspended.

removed, after which the process of restoring the trains will begin.

Railway Minister Muhammad Azam Khan Swati has taken notice of the train accident and ordered an inquiry within 24 hours.

Expressing deep sorrow and grief over the train accident, Prime Minister Imran Khan said that he was in awe of the tragic railway accident in Ghotki.

“I have directed the Railway Minister to reach the spot and provide medical aid to the injured”, he said in a tweet on his official Twitter account.

In addition, a comprehensive investigation has been ordered into the flaws in the railway safety system.

Pakistan Muslim League-Nawaz (PML-N) President and Leader of the Opposition Shahbaz Sharif has expressed grief over the train accident.

Shahbaz Sharif said that it was unfortunate that the present era was proving to be the era of train accidents.

He demanded that a real and impartial investigation of the incident should be carried out and strict action should be taken against those responsible.

The opposition leader said that despite the written report that the condition of the track was not in good condition at 13 places in the Sukkur division including the place of accident, why criminal negligence was taken?

He said that the government should take concrete steps for the rescue operation in Sindh.

Asif Zardari demanded that the federal government should pay compensation to the families of the victims.

Federal Minister for Information Fawad Chaudhry said that rescue operations were underway at the site of the train accident.

He said that in the past no work has been done in any department, we are starting every work from zero; the rulers who have been in the past have not done anything.

Fawad Chaudhry asked how Azam Swati could resign over the sins committed by Saad Rafique. We have already started working on ML 1.

Feeling tired and exhausted: How to get rid of extreme fatigue?