FOR meaning in urdu and English 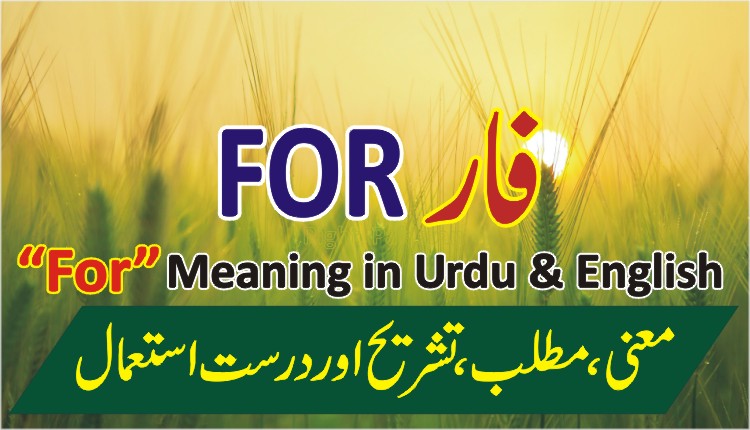 For Meaning In Urdu and English.

For Meaning in English to Urdu is کو، کیلئے، کی خاطر, as written in Urdu, and Ko, Ke Liye, Ki Khatir as written in Roman Urdu. There are many synonyms of For which include As, Considering, Now, Since, Because, Being, Whereas, Inasmuch As, As Long As, etc.

prep. Indicating the antecedent cause or occasion of an action; the motive or inducement accompanying and prompting an act or state; the reason of anything; that on account of which a thing is or is done.

prep. Indicating the remoter and indirect object of an act; the end or final cause with reference to which anything is, acts, serves, or is done.

prep. Indicating that in favor of which, or in promoting which, anything is, or is done; hence, in behalf of; in favor of; on the side of; — opposed to against.

prep. Indicating that on a place of or instead of which anything acts or serves, or that to which a substitute, an equivalent, a compensation, or the like, is offered or made; instead of, or place of.

prep. Indicating that in the character of or as being which anything is regarded or treated; to be, or as being.

prep. Indicating that instead of which something else controls in the performing of an action, or that in spite of which anything is done, occurs, or is; hence, equivalent to notwithstanding, in spite of; — generally followed by all, aught, anything, etc.

prep. Indicating that in the prevention of which, or through fear of which, anything is done.

prep. so far as concerns; as regards; with reference to; — used parenthetically or independently. See under As.

conj. Because; by reason that; for that; indicating, in Old English, the reason of anything.

conj. Since; because; introducing a reason of something before advanced, a cause, motive, explanation, justification, or the like, of an action related to or a statement made. It is logically nearly equivalent to since, or because, but connects less closely, and is sometimes used as a very general introduction to something suggested by what has gone before.

prep. In the most general sense, indicating that in consideration of, in view of, or with reference to, which anything is done or takes place.

How To Spell For [fawr; unstressed fer]

Origin of For Old English, probably a reduction of a Germanic preposition meaning ‘before’ (in place or time); related to German für, also to fore.

Similar to For – Synonyms for For

Now, Since, Whereas, Inasmuch As, As, Because, Being, Considering, As Long As,

To find the right significance of For in Urdu, it is essential to comprehend the word appropriately when we make an interpretation of it from English to Urdu. There are dependably a few implications of each word in Urdu, the right importance of For in Urdu is کو, and in Roman, we compose it Ko.

Different implications are Baabat, Baraye, Liye, Baray, Ko, Wastay, Waasta, Khatir, Taraf, Bajaye and Iss Niyat Say. For is a relational word as indicated by grammatical features. It finds its beginnings in Old English, presumably a decrease of a Germanic relational word signifying ‘previously’ (set up or time); connected with German für, likewise to the front.

There are likewise a few comparable words to For in our word reference, which are As, Because, Being, Considering, Now, Since, Whereas, Inasmuch As, and As Long As. For is spelled as [fawr; unstressed fer]. After English to Urdu interpretation of For, If you have issues in elocution then you can hear the sound of it in the web-based word reference.

ILU meaning in urdu and English

Patiently Meaning In Urdu and English

Though Meaning in Urdu and English

Awesome Meaning in Urdu and English

Hi Meaning in Urdu and English