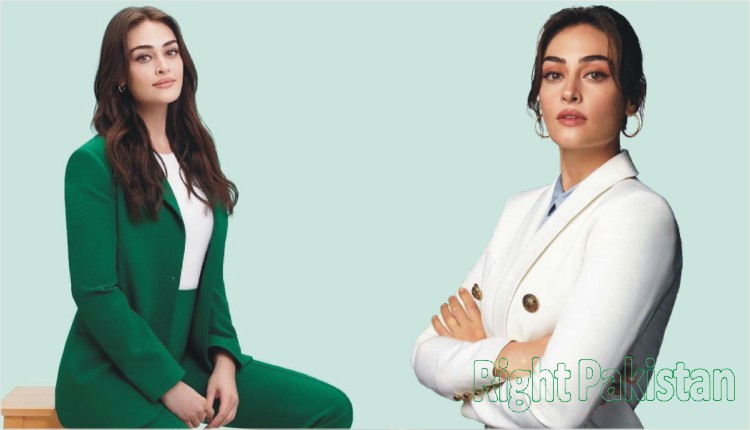 Esra looks so cute in a green coat and pants. Her new looks stunned her fans on the internet.

Posting this picture, Esra created suspense in her caption: “Hello Pakistan! I am excited to show you, my hygiene partner. Stay tuned!”

It is clear from this caption that Esra bilgiç has recently signed an agreement with another major brand in Pakistan.

It is now clear that Esra has done this agreement with a brand that manufactures cleaning products.

Esra’s fans are making their own guesses in this regard.

This will not be uncommon because Fahad Mustafa and Ahsan Khan have also appeared in advertisements for detergents that clean washrooms before.

Remember that Fahad Mustafa and Ahsan Khan are the top models and leading actors of the Pakistani entertainment industry.

News is that Esra has been appointed brand ambassador Molped, a company that produces hygiene pads for women during periods.

You can reach the true point by watching a video about this campaign.

Whatever the purpose, the fact is that Esra Belgic is the most popular female actress in Pakistan these days.

On the one hand, her hit drama “Dirilis Ertugrul” has gained popularity on Pakistan’s state-owned TV, on the other hand, Esra’s talent is selling like hot cakes in the advertising world.

It should be noted that the beautiful Turkish actress Esra gained worldwide fame with her brilliant performance in Ertugrul Ghazi.

Her fan following has also reached millions on the internet.

Earlier, Esra had also campaigned for a Pakistani mobile phone maker, a cellular company, and a clothing brand.

Fees on digital transactions are applicable now in Pakistan