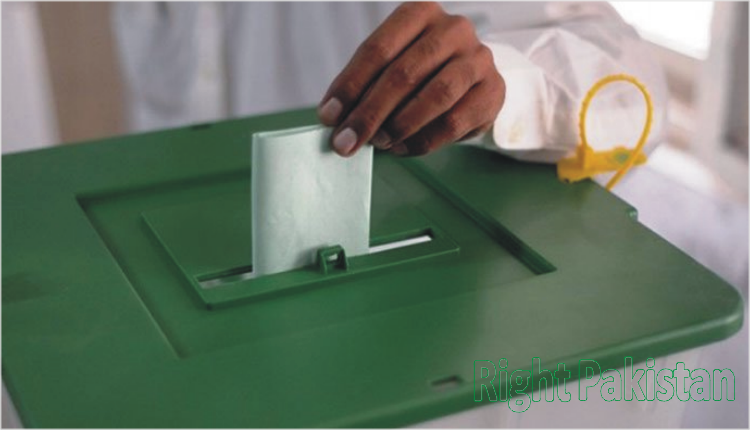 The allotted time for polling has ended, after which the counting of votes cast is going on. The polling process started at 8 am and continued till 5 pm.

Polling continued for 20 seats of the Provincial Assembly in 14 districts of Punjab while Section 144 has been imposed to establish law and order in the province.

A total of 175 candidates will compete for these 20 seats in the provincial assembly, while tough competition is expected between the PTI and the Muslim League-N.

The total number of registered voters in these constituencies is 45 lakh 79 thousand 898.

In view of law and order in the by-elections, Section 144 has been implemented across the province.

During the polling, some unpleasant incidents also happened in some constituencies. A fight broke out between political workers at the polling station of Panjar in Rawalpindi.

He said that PTI’s Jamshed Iqbal Cheema and Saeed Mahis tore off the head of the PML-N worker while torturing him.

In the same constituency, a fight broke out between PTI and PML-N workers at the polling station of UC Dharmapuri.

The PTI polling agent accused the police of bias and said that the police is allowing PML-N workers to enter, while I am a polling agent but I am being stopped, the fight took place over this.

Citizens in the same constituency complained about changing the voting area. Saqlain and Yasir Mehmood, residents of Nai Abadi Garhi Shahu, say that I am a PTI spotter, and our vote has been changed.

Due to agitation by PTI and Legislature workers, the polling process was halted for some time and voters were prevented from entering polling station 60. Tehreek-e-Insaf candidate Malik Nawaz Awan also visited the polling station.

An armed person identified as Abdul Rehman was arrested in front of Basti Syedan ​​Shah polling station in Lahore.

A mini-rifle was recovered from his possession. The accused Abdul Rehman is the private guard of a citizen named Dr. Maarif.

Chief Election Commissioner Sikandar Sultan Raja has said in a statement that if there is an attempt to spoil the situation in the election process, strict action will be taken, and the candidates involved in the mess may also be disqualified.

According to the spokesperson, the Election Commission Control Room received 6 complaints related to fights between voters and political workers, out of which 3 were resolved immediately. Authorities are taking steps to control the situation.

Taking notice of the alleged arrest of Tehreek-e-Insaf workers from Muzaffargarh, the Election Commission sought a report from the concerned DRO, RO, and Monitoring Office.

He said that the polling process is going on peacefully, a PTI worker’s head was injured in the fight and he has been shifted to the hospital.

Speaking to the media, SP Cantt Lahore said that there was a fight outside the polling station and the injured worker has been sent to the hospital.

Problems with the media

Media coverage was banned at several polling stations in Constituency PP-7 in Rawalpindi.

The presiding officers did not allow the media access to the polling booths and journalists were stopped despite having Election Commission accreditation cards.

Police holidays have been canceled to ensure peace and order during the elections, while Rangers have been directed to come to the streets along with the police and the army has been kept on standby.

Pakistan Army troops will perform duties as a quick reaction force to deal with any emergency situation.

A monitoring cell has been established in the Ministry of Interior on the occasion of by-elections.

The monitoring cell is connected with the control centers of the provincial governments and the federal law enforcement agencies, from here the law and order in the constituencies will be continuously monitored.

It should be noted that PML-N needs to win 9 out of 20 seats to maintain its dominance in Punjab.

In the election to be held on July 17 on twenty seats of the provincial assembly, there is a close contest between the Pakistan Muslim League-N and Pakistan Tehreek-e-Insaaf and other parties including the People’s Party.

It should be remembered that on May 20, the Election Commission terminated the membership of Tehreek-e-Insaf members who voted for Hamza Shehbaz as Chief Minister in the Punjab Assembly.