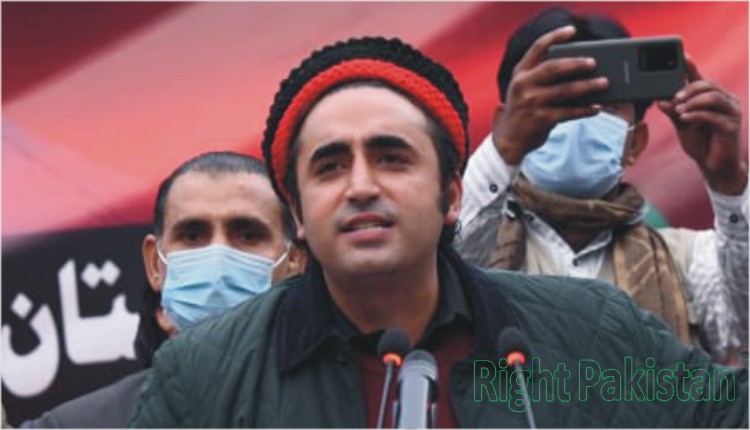 Khairpur: Bilawal Bhutto Zardari said that Pakistan has lost its economic sovereignty because of the PTIMF deal.

Bilawal Bhutto said that Pakistan has lost its economic sovereignty with the PTI-IMF deal. He termed it as PTIMF deal.

Chairman Pakistan Peoples Party said that his party opposed the PTI-IMF deal from day one; we think that there should be a policy for the whole of Pakistan.

Chairman Pakistan Peoples Party Bilawal Bhutto said, “Following the ordinance, the SBP will now be accountable to the IMF instead of being accountable to parliament and the judiciary.”

Bilawal said that PTI-IMF deal will hurt the poor, in the current era, relief is only for the rich.

PPP Chairman said, “We don’t want to get involved in any fight. Some opposition parties have been giving the impression that PPP has made a deal. PPP never does deal politics”.

“It should be noted that while conducting parliamentary politics, one has to keep in touch with the opposition leaders”, said Bilawal Bhutto.

Chairman PPP revelaed, “One of our allies opposes the PPP along with the establishment in the Larkana by-elections, yet we supported the independence march.”

“We considered Maulana as the president of the PDM, so we don’t think anyone even effort can break this alliance”, he expressed.

Bilawal Bhutto said, “As PDM chief, it is the responsibility of Maulana Fazlur Rehman to keep all parties united”.

“If the opposition parties unite and fight against Imran Niazi, then the federal government will not complete its term. I don’t think anyone needs to be persuaded”, Bilawal added.

PPP chairman said that his party will oppose the ordinance related to SBP in every forum; PPP is opposing the government in Punjab and the federation as well.

He also said that the rest of the opposition parties are opposing the opposition. He urged, putting aside differences, they should unite against the government if not tried, everyone will lose.

He said that PTI government policies have been failing for the last three years and Pakistan’s economic growth has stalled.

He also pointed that Pakistan is ahead of other countries in terms of inflation, poverty is increasing but the government has no solution.

He said that Pakistan’s growth rate is behind that of even Afghanistan today. He asked which government team had to solve the problems in 100 days as claimed and promised.

New photos of Hadiqa Kiani have blown up the internet