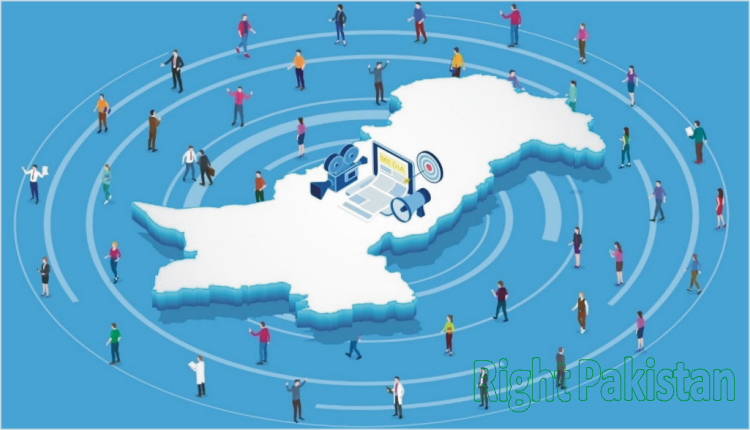 Islamabad: An eye-opening report released by PFUJ on Media freedom and restrictions in Pakistan.

Pakistan Federal Union of Journalists (PFUJ) has released an eye-opening report on restrictions on Pakistani media and independence of expression by the government.

The State of Media Freedom in Pakistan:

The report explores the structural dynamics of the media landscape and its impact on media freedom in Pakistan.

It assesses the role of relevant legal and regulatory frameworks as well as formal and informal mechanisms employed by the state institutions and their impact on media freedom in Pakistan.

The study relies on primary and secondary sources of data.

The primary data is resourced from key informant interviews (KIIs) and testimonials of journalists and analysts.

Thirteen (eight men and five women) Key Informant Interviews (KIIs) and 34 testimonials of journalists on suppression of the media, recent retrenchments, and the state of weak employment regulation contributed to the report.

PFUJ on Media restriction in Pakistan: 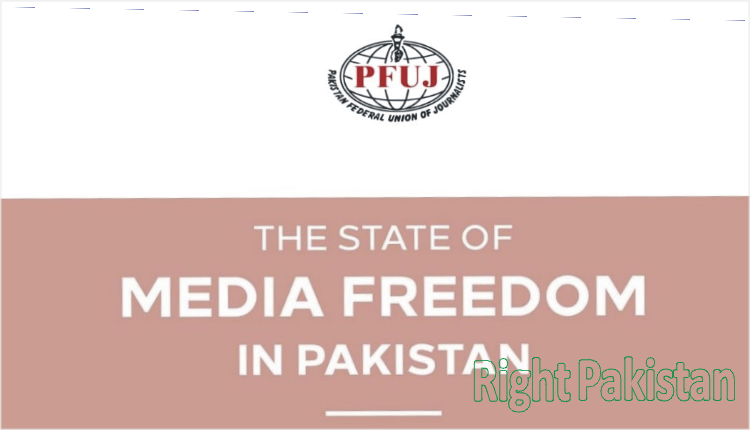 The secondary research supplemented the study to factor in the opinions of other stakeholders and provide a broader picture of the thematic areas covered in the report.

These include published work, such as research reports and articles, as well as media pieces on the subject.

The report was conceived and drafted in tandem with PFUJ’s consultation, coordination, and mobilization of regional chapters of journalists’ unions and press clubs under its campaign for media and journalist freedoms.

The shared timeline of the initiatives allowed the report’s content to reflect the learnings from these interactions whilst simultaneously informing the agenda for both formal and informal engagements with journalists as well as other key stakeholders, especially PFUJ’s provincial seminars on the state of media and journalists in Pakistan.

PFUJ on Media restriction in Pakistan:

With the expansion of digital media in recent years, a ‘tripod of censorship’ has evolved to curb the freedom of media and expression in Pakistan.

At the heart of the diminishing space for open media discourse lies an increasingly assertive state and media ownership dynamic that is more suited to cooption and mutual adjustment than a struggle for freedom of the press — a factor that is establishing and expanding restrictions on the media more effectively and comprehensively than at any other time in the country’s history.

This study looks into the dynamics of the ‘state-media owners’ relations and their impact in the shape of multi-layered censorship.

It explores the evolution of the nascent ‘state-media complex’, its control mechanisms, and the consequences for individual journalists and journalists’ associations that reinforce compliance with the state’s narrative at the individual and group levels.

The study concludes with deliberation on the consequences of the tripod of censorship and potential avenues which may help alleviate the cause of media freedoms in Pakistan.

The State of Media Freedom in Pakistan:

From Resistance to Compliance: Historical Evolution of the State – Media Relations in Pakistan
Pakistan ranked 145 on Press Freedom Index in 2020, slipping from its 142nd position in 2019.

1: The ranking reflects a grim milestone in national history that is replete with the state’s perennial efforts to control the media.

The scale and scope of the existing multi-layered censorship and restriction regime, comprising legal and administrative measures, whilst not new in its intent, is more comprehensive and consequential this time.

At the heart of the unprecedented restrictions lies the widespread compliance of the media houses and conglomerates with the state’s demands—a position of power that the state wields by employing an array of punitive measures and incentives.

In the decades following Pakistan’s emergence as an independent state in 1947, relations between the then-nascent press and the state were molded by the latter’s desire to control the content and flow of information.

For the better part of the history of state-media relations in Pakistan, both military and civilian governments devised legal and administrative measures to keep the media in check.

For instance, the Press and Publication Ordinance (PPO) 1960, which, serving as one of the key instruments to curb media freedoms, authorized the government to demand security deposits and declaration from publishers, confiscate and close down newspapers, or arrest editors who refused to oblige.

2: Promulgated by Ayub Khan and repackaged successively by (elected and non-elected) governments to suit their own conditions and purposes,3 the Ordinance introduced restrictions which have emerged time and again over the decades punctuated by the myriad restrictions on media freedoms.

Faced with these challenges, some journalists chose to be co-opted by the state while others defied the curbs, organized themselves, and put up collective resistance against the increasing state repression to reclaim media and democratic freedoms.

Mention should be made here of the Pakistan Federal Union of Journalists (PFUJ) and other countless unions, organizations, and individuals who waged a relentless struggle against authoritarianism spanning over decades, reaching the apogee in the 1960s and the 1970s, and resulting in such historic gains as the passage of the Newspapers Employees Condition for Services Act, 1973 by the Parliament and the accompanying Wage Board Award that protected the economic rights of working journalists.

With new draconian changes, PPO was also employed during General Zia-ul-Haq’s era (1978-1988), perhaps the darkest period in the history of media freedom that was marked by rejuvenated restrictions that went hand in hand with naked and direct state suppression of newspapers and publishers.

A historic movement was launched against media censorships during which journalists suffered imprisonments, flogging, torture, exile, and even assassination.

4: Although PPO was revoked in the following decades, successive governments in the 1990s used other anti-press laws and tactics – such as withholding of advertisements – to keep the press in chains.

5: Another milestone in the media’s history was reached with the liberalization of airwaves under the General Pervez Musharraf regime, which subsequently led to the mushroom growth of private television news channels and newfound freedoms, eventually paving the way for the transition from press to electronic media.

While the Musharraf regime repealed PPO, the fundamental legal framework of the repealed Ordinance was repackaged in the consolidated Press, Newspaper, News Agencies, and Book Registration Ordinance of 2002.

iPhone 7 Plus Price in Pakistan