Absar Alam is not conscious! 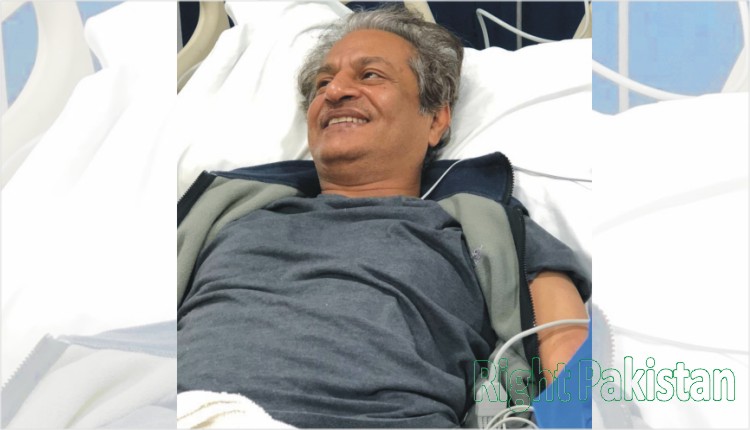 I have just met Absar Alam in the ICU of a well-known hospital in Islamabad. The bullet mark on the gray T-shirt was very clear.

He had a drip of canola in one hand. The bullet wound had been bandaged. Dozens of journalists were walking outside the hospital emergency ward in a state of panic.

Cameras from several TV channels were installed for coverage. A fresh police squad had taken up position outside the hospital in anticipation of the arrival of dignitaries.

Admission to the hospital was strictly forbidden. Dr. Bilal and Dr. Osama, the Head of Emergency of the renowned hospital, were briefing everyone in turn.

The medical director of the hospital, Dr. Waheed Mir, also arrived on the scene. He shifted Absar from emergency to ICU under his supervision.

Briefing about Health of Absar Alam

According to Dr. Bilal, the bullet had penetrated through the body. It was feared that some part of the liver had been damaged by the bullet, but Absar Alam’s condition is now out of danger.

He will be kept in the intensive care unit for the next 48 hours, after which it will be possible to determine if surgery is needed. The damage could have been greater if the bullet had remained inside the body.

The doctor was saying thanks that the bullet went through his body.

I could not tell the doctor what the journalists of this country should be thankful for because Ahmed Noorani’s head injury wasn’t so severe that his brain came out. Either we shall be thankful that footage of Matiullah Jan’s daytime abduction was available, or be thankful that Omar Cheema returned home alive after the brutal torture. Now thankfully the bullet has crossed Absar’s body. What should we be thankful for?

Few people watch TV after breaking the fast, but as I turned on the TV by chance; I read the shocking news in the tickers of Geo News that Absar Alam has been attacked and shot.

According to the news, Absar Alam was walking in F-9 Park.

So far, the whole of Pakistan had come to know the outcomes of such an investigation. How many criminals are caught? How many are punished?

The hospital is about 40 minutes away from my house. My wife and I kept calling friends all the way to check on Absar.

Since it was Iftar-time, many people were unaware of the accident. Everyone we spoke, he ran to the hospital.

There was no parking space outside the hospital emergency. All the well-known journalists were there by the time they parked the car and reached the emergency door.

Absar’s wife and son were also present there. Both were encouraging everyone, showing their own encouragement.

Our sister (Absar’s wife) was upset, but she did not express her concern. She was enthusiastically telling everyone the details of the incident.

Silencing the voice of dissent is a cancer that has plagued this country for many years. Absar Alam Sahab is the latest victim of this cruel & barbaric crime. May Allah SWT heal his wounds and the wounds of this country. Ameen.

I had the opportunity to meet Absar for two minutes through Dr. Bilal, a very kind man from a well-known hospital.

Absar’s face must have been tired but he was very conscious. He was consciously telling us that there was a small park near his house.

He was walking in the park as usual; he had a stick in his hand at that time.

An unknown man approached him with his hand over his face. As he approached, he opened fire, which struck Absar in the abdomen.

At first, Absar only heard the sound of an explosion and then realized the pain of the bullet.

Absar approached the man with a cane but the man in a shalwar kameez escaped.

A few people from the neighborhood came there and informed Absar’s house, so Absar was soon taken to the nearby hospital.

After telling his story, Absar started saying the same things in his traditional way which are forbidden in this society.

He was talking with full intensity in all his senses. He had no sense of pain or distress. Despite his wounds, he was adamant.

Absar Alam is not conscious

Absar Alam was conscious by the way, but in fact, since we know Absar, he has never been conscious.

People who are conscious in this country are afraid of the powerful. They care about personal harm, they talk with their heads bowed and do not challenge the powers.

But Absar Alam has spent his entire career against it. When Absar was a journalist, he considered it an honor to face the powers.

When he was an anchor, Absar would pile up the whole theory of fascism in one question.

When Absar became the chairman of PEMRA, instead of bowing down to unknown phone calls, he publicly exposed them. And when he lost his job, he stuck to his goal.

In our country, such people are not conscious. Those who live consciously fall prey to interests, see a personal gain and walk with their heads bowed.

But Absar did not do so all his life and at every stage of his life, he suffered the consequences but did not compromise on his principles.

What an age it is when intimidators scare people in every possible way, but people are not afraid.

People are ordered to be silent, even they get hurt but people don’t care.
This is a moment of reflection for the cowardly people who are only afraid of Absar’s tweets,

who are afraid of the truth, and who tremble when they hear the truth. In fact, this society has now changed and people have become fearless.

A large part of this courage comes from the people like Absar who don’t remain conscious according to the customs and traditions of this society.

By the same WRITER: 12 Conclusions of the Daska Election NA-75

Instead of obeying the law, the powerful forms alliance like PDM: Prime Minister Imran Khan